Secret-keeping is bad for the soul.

But, isn't part of the fun of Christmas all about the art of keeping secrets, after all? 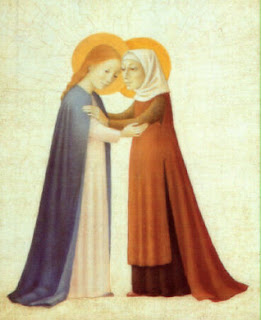 I mean, who hasn't known the fun of secretly buying someone what you believe is the perfect Christmas gift?  Who hasn't snuck through the house trying to find the Christmas "stash?"    Who hasn't shaken that beautifully wrapped present, felt its weight or considered its shape?

Secret-keeping is part of the fun.   Family legend at my house says that one year my grandfather had unwrapped all his gifts, tried them on and even returned one, all before Christmas morning.   Now he was good.

But there are other kinds of secrets that don't have to do with surprise.  They have to do with fear or shame. Sometimes, they may even do with a strange kind of latent hope that lives inside our hearts, but we become afraid that sharing our secret hope might mean that it never comes true.

We live with the shame, burying it inside of us.  We let the flame of vision and hope burn down to the tiniest ember.  And the pain of carrying those secrets steals our joy.

Adam Hamilton points out in The Journey, that Mary must have held Gabriel's message as her own secret for the 9 or 10 days it would have taken her to travel to Elizabeth's house.

Can you imagine the weight of it?  The angel had told her that Elizabeth was pregnant too, in her old age.  Mary couldn't send a text, or hit her up on facebook.

She had to travel, on foot, over mountains.  And all the while, there was a secret to be kept.

When they saw each other, the secret burst forth.  Elizabeth exclaimed that she knew Mary's news.  She could see it on her.  Hope, mixed with fear, gave way to joy.

Releasing the secret to this trusted loved one, Mary cried out the famous words..."my soul magnifies the Lord!"

What about us?  What secret is stealing your joy?   What makes you hold it?  Who can you tell?

Start by saying that secret out loud to God, and ask God to show you someone else who will understand.

That secret source of pain could be the very place of joy that God longs to give you.  It could be the piece of your life story that someone else desperately needs to hear.

Grace, Peace -- Come hear more about Mary and Elizabeth this Sunday at 10:30 at SOTH!
Adam
Posted by Adam M. Roberts at 11:11 AM No comments:

Can Christians Have Their Doubts?

Can Christians have their doubts?

Of course we can.  Want to know where I learned that?

Joseph.  As in Joseph and Mary.

Why wouldn't he?  The woman to whom he was engaged told him that she was pregnant.  He knew the baby wasn't his.  She said she hadn't been with anyone else.

What would you say to that?

I know what I would say.  I'd say, "I doubt that very much."  That's if I was feeling particularly charitable.  Joseph may have said something a little more salty, to say the least.

We know Joseph doubted, because he had decided to be a "good guy," and just break off the engagement quietly.  Charitable, yes.  Realistic, yes.  Saintly faith?  No.  He didn't buy it.

I find that hopeful.  The truth is, I have my doubts, too.  Lots of them.

But what it does mean is something bigger, and better.  It means that like Joseph, in spite of our doubts, and in the face of overwhelming odds, we trust the glimmer of light and truth that is God in our midst.

Joseph is a saint because he dared to believe in the face of his doubt.  That is the kind of heart that God is looking for, and the heart that God uses to change the world.

Grace & Peace for the Journey --
Adam
Posted by Adam M. Roberts at 4:32 PM No comments: 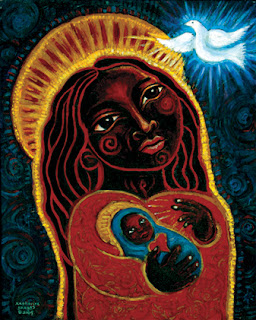 Wednesday night's gathering at SOTH to discuss The Journey yielded lots of great discussion and got all of our "wheels" turning on what the experience of that first Christmas might really have been like.

A question emerged:  Can we say no to God?

What about us?  Can we thwart the will of God?

Mary had good reasons to say no.  Namely, safety.  She was told by Gabriel that this child would be the King, the Annointed One, the Messiah of Israel.  That meant he was a direct threat to King Herod.  And Herod didn't do very well with being threatened.

He was ruthless and had already killed some of his own children who had threatened his rule.  Scripture tells us that after the visit of the Magi, he ordered the execution of all the baby boys who could be the one.

But there was even more.

Old Testament law made Mary's "offense" of pregnancy out of wedlock punishable by death.  The religious authorities had the right to have her stoned to death.  At the moment she said yes, she didn't know what Joseph's reaction to her condition would be.

She had lots of reasons to say no.  But she said yes.  And it was dangerous.

Sure, but she was looking at an angel, right?  Adam Hamilton puts forward in his work the idea that the "messenger" Mary faced might very well have looked like any other human being.  Still, she said yes.

What about us?  What could God be calling us to, right here, right now?  Does it involve risk?  Is the calling of Christmas still dangerous?

If what we feel is a call from God, it will almost surely involve risk and a kind of danger.  Without that risk, there isn't much possibility of growth.

And God is all about the growth of something new.  Just ask Mary.  She said yes.

The Journey: Mary of Nazareth

Wecome to my thoughts and reflections and Shepherd of the Hills discussion of Adam Hamilton's The Journey:  Walking the Road to Bethlehem.

This great book will serve as the center of our worship experiences these next few Sundays, and we'll be going deeper in a gathering at SOTH on WEdnesday nights, at 6PM.

In addition, we'll be walking through Hamilton's daily devotional thoughts.  I'm glad we're together for the ride!

Today, and really this entire week, is all about Mary's encounter with Gabriel, and the message she learns about the baby she will soon conceive.

Luke 1:26-30:  The Message
In the sixth month of Elizabeth's pregnancy, God sent the angel Gabriel to the Galilean village of Nazareth to a virgin engaged to be married to a man descended from David. His name was Joseph, and the virgin's name, Mary. Upon entering, Gabriel greeted her:  Good morning! You're beautiful with God's beauty, Beautiful inside and out! God be with you.  She was thoroughly shaken, wondering what was behind a greeting like that. But the angel assured her, "Mary, you have nothing to fear. God has a surprise for you: You will become pregnant and give birth to a son and call his name Jesus."

I love Hamilton's lead question for today's reading.  What do you think about angels? 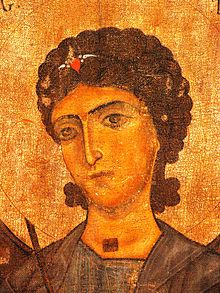 What did scripture mean by the word?  While we may not be able to know exactly, we do know that the meaning on the face of the New Testament word was "messenger."  Check out the word, "aggelos."

I definitely believe in messengers.  I have met plenty of them in my life.  Just as Hamilton relates experiences he has had with God's messengers, I can think of people who have spoken what turned out to be nothing short of God's word into my life.

Divine providence?  I think so.  I do believe God speaks to us.  In the Bible, this happened through dreams, visions, or physical messengers.

What is God trying to tell you in this Christmas season?  What are we being prepared for?

Hebrews 13:2:  "Do not forget to entertain strangers, for by so doing some people have entertained angels without knowing it."

Jesus was not welcomed into the inn on the night of his birth...may we open ourselves to the "strangers" God sends into our midst with his message.  Believe in aggelos.

"I am the way, and the truth and the life.  No one comes to the Father except through me."

"I am the gate; whoever enters through me will be saved.  He will come in and go out, and find pasture."

"I am the resurrection and the life.  He who believes in me will live, even though he dies."   -- Jesus 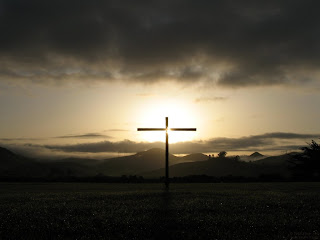 Confession time:  sometimes I cringe when I hear Christian, church folks say phrases like, "plan of salvation."  Today's reading in in our guidebook describes a "plan of salvation" kind of moment between two friends in a coffee shop.   I hate that I sometimes find that cringe-worthy, though I think there's good reason why I do.

Too many times I've found myself in churches, or surrounded by Christians who focus exclusively on that moment of "crossing the line,"  or "praying the sinner's prayer."  They rejoice, just like in the earlier post from this week, because a new name has just been added to the heavenly roll.

And then things just kind of stop.  There's no plan for becoming a discipleship.  It's like starting a race, celebrating the huge first step, and then leaving the runner on her own.

I've just always felt like, "we can do so much better.'' Not to mention that we can leave a new believer feeling used and confused.

But, let me be the first to say, I and other groups of Christians are definitely too often guilty of throwing out baby and bathwater, and that's just not excusable.

You see, I think it's true that we need a life-long plan of growing in our faith.

But, we do need to start.  And most of all, we need a way to bridge the divide.

Sin is a very real problem.  I think the ancient, Greek New Testament way of thinking about it is extremely helpful.  Sin is to "miss the mark."  It is the separation between where we are, and the place that God wants to give us as a new and better way.

Christians have lots of not too flattering words for people who are moving through life with that deep sense of unresolved separation, and I'll be the first to say that I don't like most of them.

But I do kind of like one.  Even though some people might find it offensive to hear it if somebody's applying it to them, I think the best and most charitable description of life apart from God might well be, "lost."

The Old Testament was obsessed with how to make that situation right.  There was an elaborate system of sacrifices and rituals that could make a person put down their guilt and know themselves to have somehow closed the gap of separation that sin creates between us, God and other people.

Christianity says that gap can be closed forever, finally, once and for all.

It is an offer of grace.  The perfect sacrifice chose to give himself.

There is a bridge across the divide.  When someone who "once was lost but now is found," sees the truth of walking across that bridge.  There is well and truly reason for celebration.

And a whole new life is just beginning.

Grace, Peace, and Forgiveness that Closes the Gap,
Adam

Today's Big Idea:  Pray that God will show you the right person, in the right time, in the right relationship, and in the right way to have a spiritual conversation in the near future.
Posted by Adam M. Roberts at 12:03 PM No comments: